Stuart Lewis, from Alpine Engineered Products, tells us: “I do not understand why there would be any difference in the gable-end-web L-brace lengths between non-scissors and scissors trusses, but there is a reason why the L-brace may have to contact the chords. L-braces for gable end trusses (regardless of whether they are scissors or not scissors) may be designed to carry the loads that act out-of-plane on the truss to the roof diaphragm above and the ceiling diaphragm (or other lateral supporting structure) below. For this reason, these L-braces may require a connection to the chords, and not simply to the webs, if the plates connecting the truss web to the chord cannot carry these out-of-plane loads to the chords. This, in turn, would require that the L-brace be at least as long as the web (100% of the web length as you say), or longer, so that a direct connection can be made between the L-brace and the chord in some way. In such a case, one option may be to have the L-brace placed entirely to the inside of the truss, so that the nails connecting it to the truss web are parallel to the 1.5 inch dimension of the truss web, which will permit the L-brace to be longer than the web length without needing to be notched as it can then just overlap the chords on the inside of the truss and be connected in that overlap area to the chords.” A 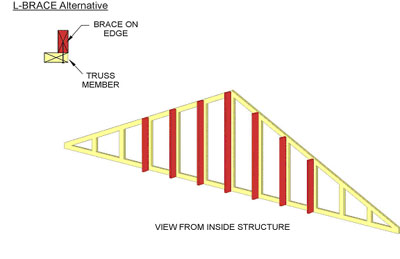