Manage Your Market: One Tour at a Time

Manage Your Market: One Tour at a Time

A tour can seal the deal with potential customers or cement a relationship with established ones.

Carpool. Safety glasses. Plant tour. Perspective. On a pleasantly cool Wednesday this past January—a 12°F high was a nice change from the below-zero wind chills of the previous week—SBCA staff followed in the footsteps of BCMC attendees and toured the Windsor Building Systems, LLC plant in Madison, Wisconsin. For new staff, this field trip was an eye opener. It provided context for the products displayed on the BCMC show floor, and it brought home the scale and complexity of component manufacturers’ day-to-day work. For staff who’ve been on plant tours before, it was a good refresher.

Windsor has successfully rebuilt since a fire destroyed the plant in January 2014, and as a subsidiary of Amwood Homes, they do a thriving business in component construction for panelized homes. So this tour was unique both because the shop boasts a new set of equipment and because the production staff is engaged in a wide scope of activity.

Of course, SBCA staff aren’t the typical visitors stopping by a component manufacturing plant. Michael Balliet, general manager of the Builders FirstSource Southeast Group, LLC in Shelby, Alabama, says customers are his usual guests. A tour “blends customer entertainment with a sales pitch,” he explains. It can help “seal the deal” with perspective customers and is an opportunity to bond and cement a relationship with established customers.

It’s also a chance to build empathy as well as knowledge. People tend to ask how many trusses can be built in a day or how long it takes to build all the trusses for a single house, Balliet says, but customers who see the operational side of component building, in addition to the design and sales side, have a much better sense of what a company goes through to get a final product to the jobsite.

At Windsor, CEO Doug Scott starts every sale with the same explanation: “We have to build a house on paper first.” Fabrication may be impressive and framing might be top of mind for the customer, but Scott emphasizes that the plans are the real key. “I tell customers it's like a paint by number,” he says with a smile, flipping through page after page of elevation, floor deck and truss placement drawings.

Plan tours with hiring in mind

Dave Raasch, general manager of Lloyd Truss in Mankato, Minnesota, often gives tours to a different audience—and he generally steers clear of pencil-and-paper discussions. For a decade or more, students from the local high school and community college have been stopping by regularly to look around his plant, and they’re always most interested, Raasch says, “in the technical stuff.” The 3D drawings, CAD software, computerized saws and laser systems are the pieces of technology that are always a hit with young people.

“We’re interested in promoting our product and promoting our business,” Raasch says. “We want to have a good name and reputation in the industry.” And, of course, when those students get around to thinking about homebuilding, it’d be great to have them request Lloyd Truss products.

But it’s not about showing off, Raasch says, it’s about recruiting. What he’s really after is the chance to turn students’ interest in learning about the industry into permanent positions. Instead of asking about the lasers and computers, Raasch says, “I wish a lot of them would be asking, ‘when can we start?’” He cheerfully acknowledges that hasn’t been the case so far, but the company has hired a handful of community colleges students into office positions and does find summer help among student visitors. (See "A Simple Invitation" for more on Raasch’s approach to workforce development.)

Raasch says there are other reasons for holding tours as well. “When we have people in,” he explains, “sometimes the questions they ask make us aware of how the public is thinking about things.” Tours can help plant management teams know what concerns the public has about their products and how the community thinks about their business. In that sense, a tour is as much a learning opportunity for the tour guides as it is for the tour guests.

The insight of a non-expert can be enlightening. It can also be a good reminder of what’s not intuitive to those outside the industry. Raasch points out that some of the questions most frequently asked by students are things that are obvious to a truss manufacturer. For example, one popular question is: “How big can a truss be?” Raasch’s answer: “Only as big as what you can haul down the road.” Clearly, if you can’t fit the truss on the truck, you can’t get it to the jobsite. So Raasch uses this question as an opportunity to explain various design possibilities, like using interior bearings to give a truss system multiple supports or flat topping a truss so it fits within the width limits of the flatbed or of road regulations.

Learn from an expert audience

In many cases, though, it’s an expert audience that can nudge you to rethink your work. A change to the building code in 2006 prompted Lloyd Truss to offer a tour and educational session to contactors. Local building officials came as well, and it was an effective way to share tips on bracing, handling and setting trusses, as well as to showcase everything Raasch’s plant does “to help make a better truss.”

Balliet has also invited code and fire officials for tours in the past, but says that he has found greater success in keeping communication channels open by attending building officials’ meetings and giving presentations. Primarily, Balliet says, he enjoys tours with his peers.

“We did a plant tour for our Alabama chapter,” Balliet recalls with enthusiasm. A plate manufacturer representative joined the group to give a presentation and demo. “You learn how other people do things,” Balliet explains. “It inspires you.” Seeing someone else’s operation, he says, reminds you to get back to principles and practices that you might be letting slide and gives you a renewed appreciation for “the things that you take for granted because you see them all day every day.”

Touring with peers is also a chance to pick up tips that don’t necessarily come up as BCMC session topics or make it onto the agendas of CM Roundtable discussions or SBCA meetings. For example, the Windsor tour included a stop in little-used shed that just barely contained a component saw on which each blade needed to be set manually. Scott explains that this machine worked well enough for the houses Windsor supplied years ago, when designs called for only a few different trusses for an entire roof. These days, Scott says, the houses he builds are more custom and complex, so the automated linear saw is critical to productivity. When the plant is running at capacity, though, or when an order comes in for a large quantity of a single truss, the old saw still sees use. Even further down the list of tips that you won’t pick up elsewhere: how to live peaceably with a raccoon who’s taken up long-term residency in the trim and cabinetry warehouse and who insists on checking out the light switches.

So whether you’re looking to build community ties, introduce a new potential talent pool to the truss industry or get some advice on dealing with the day-to-day quirks of your operation, give some thought to hosting tours. If you’re currently offering tours but doing so infrequently, think about who else you might reach out to. A tour is a great marketing opportunity, an impressive recruiting tool and an ideal chance for networking. Even when those possibilities don’t pan out, there are still perks. If nothing else, says Balliet, “it inspires you to clean up!”

About the Author: Dale Erlandson joined SBCA staff last fall as the assistant editor of SBC Magazine. She has written for a variety of publications over the last decade and thrives on the challenge of learning something new and passing that knowledge along through the written word. 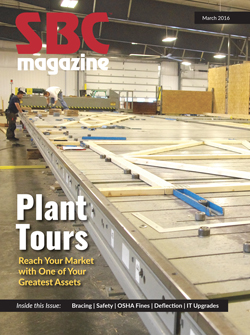 Fine & Not So Dandy
Manage Your Market: One Tour at a Time
A Simple Invitation: How One CM Is Building His Workforce
Keep Your Friends Close & Your Safety Friends Closer
Continuous Improvement Can Prevent Disaster
Tending to Deflection: Improving the Performance & Serviceability of Trusses
One Day. Two Busloads of Students. Three Steps.

Faces of the Industry: Meet the 2016 Officers of the SBCA Board of Directors
Being President Has Its Perks
Brace Yourself!